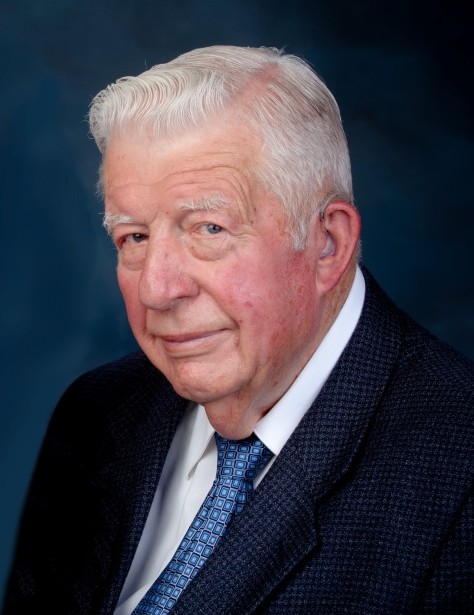 The oldest of three children of Warren V. Ashton and Birdie L. Bair, he was born 24 October 1930, in Richmond, Utah, near his grandparents’ home.

He learned the rigors of farm life and the value of hard work, of being active and being involved in making something happen and taking pride in accomplishment.

He grew up on a farm near Malad, Idaho, where he graduated from high school. He then  attended Utah State University until he was called to serve an LDS Mission in the British Isles where he had the fortune of being senior companion to three High Priests who were significantly older and more experienced in life than he. The mission provided an awakening of higher ambitions.

Returning to college, he became involved in his studies; but also in extracurricular activities that promoted good causes. This activity was acknowledged when he received an honorary “A Performance Certificate” for outstanding contributions. Warren, also, served in the Priesthood Presidency of the LDS Institute of Religion Program.

Upon graduation he received an ROTC Commission in the Air Force leading to an assignment, through unusual circumstances, as Project Officer for ocean shipping responsibility at  Thule, Greenland Air Force Base, the world’s farthest North base and home of 7,000. It was reported on the front page of the Air Force Times. (Thirty-nine ships were involved. Warren supervised 180 augmentation personnel during this project.) This operation provided great evidence for the value of listening to good mentors, particularly when in over one’s head.

Later, he was designated Project Officer for all ground transportation for a world-wide SAC Commander’s Conference.

Because of his organizational skills the Air Force promoted him to Captain while on inactive duty as an inducement to come back in as Project Officer on another key assignment involving a classified new construction operation.

Most of Warren’s career was in Human Resources in the missile industry at Hercules and Thiokol and then the computer controlled warehousing at Eaton. He was also employed at Ajax Presses and Beehive Computers.

Professional capabilities were enhanced by qualifying for ASPA accreditation as Personnel Manager and later as an Executive in Personnel. Also, he was a Certified Arbitrator for the Better Business Bureau.

He served for ten years on the Cottonwood Community Council while it focused on initiatives for the community features: Cottonwood Spa; three parks; Whitmore Library; and  fire/police station were launched to match population growth and to enhance the quality of community life.

The Church of Jesus Christ of Latter-day Saints was a guiding light in his life. Subsequent to his mission to England he was set apart as an LDS Military Group Leader, Temple Square missionary and trainer, Gospel Doctrine and High Priest teacher, Bishop, High Council, twice as High Priest Group Leader, Stake Mission Presidency, Ward Financial Clerk, and was recently released as Stake Welfare Specialist assuring that manpower for work assignments was met.

As a proponent of giving back to society, he responded to requests to serve on various professional advisory boards. He served as an officer on the Salvation Army Advisory Board,

Governor Calvin Rampton wrote a personal letter thanking him for contribution to State economic efforts. One year Warren received a plaque from Utah Technical College as top advisor of the year. Later, he also responded to requests to serve with Junior Achievement and Catholic Charities. Warren, also, was appointed for a term with County Planning and Zoning. On May 22, 1961, he and Mae Dean Gossett were married in the Salt Lake Temple by Elder Sterling W. Sill, whose secretary had introduced them. Mae Dean passed away September 20, 2016

He was preceded in death by his wife, Mae Dean (whom he affectionately addressed as “Dear” throughout their married lives); parents; brother, Kenneth; and a 9-year-old grandson, Adam Ashton.

In lieu of flowers, donations are suggested to the Church Missionary Fund.

Charitable donations may be made to:

To order memorial trees or send flowers to the family in memory of Warren Ashton, please visit our flower store.