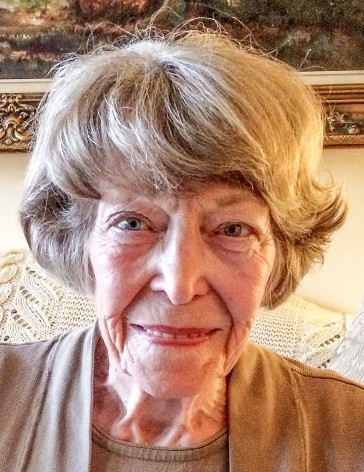 Valaine (“Val”) Jones Moffitt, beloved wife, mother, grandmother, and great-grandmother passed away quietly on March 6, 2020, at the age of 91.  We will miss her boundless optimism, her constant nurturing, and her unwavering courage in the face of life’s trials.  But, we rejoice that she is reunited with her eternal companion and best friend, Jack, and her family and friends who preceded her in death.

Val was born in Huntington, Utah, on October 8, 1928, to Elisha Glenn Jones and Vonda Sherman Jones.  She was proud of her pioneer heritage, which included grandparents who were called to the San Juan Mission and who blasted and chiseled a 180-mile trail from Escalante, Utah, through the Hole-in-the-Rock, to reach and colonize what is now San Juan County.  She grew up in Emery County, Utah, in a loving family and a large extended family.  She was blessed with many cherished childhood friends and classmates, with whom she remained close throughout her adult life.

Val lost her mother to illness when Val was young, and, as a result, from a very early age she was independent and resourceful. After graduating from high school, she moved to Salt Lake City, at the age of 17, to study cosmetology.  She was a part-time stylist and instructor for many years while she raised her family.

Val married Jackson W Moffitt on February 28, 1947, in Huntington, Utah. Their marriage was solemnized later that year in the Manti Temple. They were incredible life partners for 61 years.  They exemplified self-sacrifice and total commitment to each other.  Val was an active member of The Church of Jesus Christ of Latter-day Saints and she served in many callings, including a mission presidency, as a Stake and Ward Relief Society President, as a gospel doctrine instructor, and as a temple worker in the Jordan River Temple.

Val loved to learn.  She obtained an Associate Degree in Art and Design after she had raised her family.  She was well-read in the Scriptures, English literature, history, philosophy and social sciences.  She loved the arts.  She actively participated in a book club and Utah Opera Club until her death.  She was a talented artist, who painted everything from school play backdrops to award-winning oils and watercolors.  Her artwork hangs in businesses and personal collections. She spent hundreds of hours painting with (and on) her grandchildren and teaching them how to be happy.  Most of all, she was a loving and devoted wife and mother.  She leaves a legacy of service to others and an example of optimistically enduring to the end in the face of crippling pain from severe rheumatoid arthritis and osteoarthritis.

Val was preceded in death by her husband, Jack, her parents, and her brother, Larry.  She is survived by her sisters, Catherine (Jim) Nelson and Glenna (Gary) Kofford, her four sons, Jackson Kirk (Fern), Ronald Glenn (Suzanne), Mark Howard (Jana) and Scott Edward (Jerelyn), and by 12 grandchildren and 14 great-grandchildren, each of whom knows that he or she was Val’s favorite!

In lieu of flowers, please consider a donation to a charity of your choice.

To order memorial trees or send flowers to the family in memory of Valaine Moffitt, please visit our flower store.