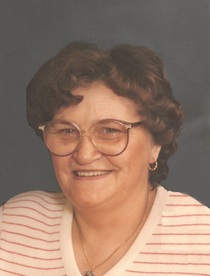 Funeral services will be held Wednesday, December 30, 2015, 2:00 p.m. at St. John Lutheran Church, 1030 South 500 East with a visitation one hour prior to services at the church .  Interment Redwood Memorial Estates.

The family wishes to thank grandson, Timothy Graham for his personal care of Theresia as well as Vicky and Misty.

To order memorial trees or send flowers to the family in memory of Theresia Ebell, please visit our flower store.