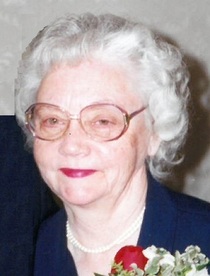 Thais Thurston Williams, our loving mother and grandmother, 87, passed away on October 14, 2016 at her home. She had been in declining health since the death of her husband Douglas.

Born February 4, 1929 in Hurricane, Utah to Paul and Alice Thurston.  She met Douglas Williams while attending college in Cedar City, Utah. They were married in the Salt Lake Temple on September 3, 1948.  Douglas passed away in 2010.

Thais was a faithful member of the LDS church all her life.  She returned to school and graduated from the University of Utah with a Bachelor degree and later a Master’s degree.  She played violin in the University of Utah Symphony Orchestra and the Bonneville Strings.  She taught deaf children in the Davis school district for many years.  She was very active in prodding the Utah schools to place deaf and other children with disabilities into the mainstream and fought for them to be included in regular society. She served with her husband as ordinance workers in the Jordan River Temple, and they filled a two year humanitarian mission.

Visitation and funeral services will be held October 25, 2016 at Union Third Ward, 1535 E Creek Road, Sandy. Friends are invited to a visitation at the in Third Ward, on Tuesday from 9:00 am to 10:30 am, prior to services at 11:00 am.  Interment: Elysian Gardens, 1075 East 4580 South.  In lieu of flowers, please make donations to the AG Bell Association at www.agbell.org.  Online condolences may be shared at www.cannonmortuary.com.

To order memorial trees or send flowers to the family in memory of Thais Williams, please visit our flower store.