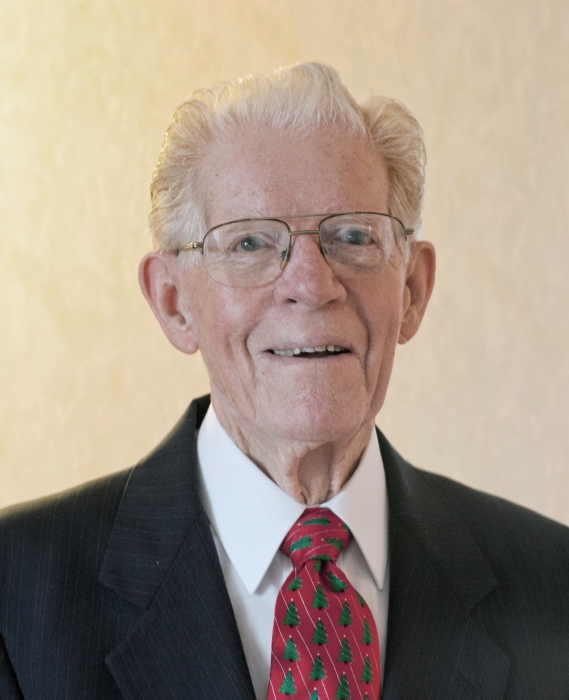 
Ray Glen Forman, age 92, Salt Lake City, UT, passed away September 2, 2017, due to complications from aspiration pneumonia. His 70th anniversary would have been September 3rd. He was in Heaven to celebrate this anniversary with his wife, Maryetta, who passed away four months earlier.

Ray was born on October 21, 1924, to Albert Glen and Martha ReVella Wray Forman and raised in Idaho. He was student body president at Idaho Falls High School and graduated in 1942. He attended Utah State University for a short time before he was drafted and enlisted in the Navy. After WWII, he returned to Utah State where he met and married Maryetta Gardner on September 3, 1947, in the Idaho Falls Temple. After graduating from USU with a degree in History, they lived in Boise, ID, where their two daughters, Gwen and Michale, were born. They then spent two years in Idaho Falls, ID. In 1960, Ray’s work took them to Downey, CA.

Ray managed insurance agencies for both New York Life and Mutual of New York. The family moved to Utah in 1975, and Ray worked as an advisor for Clark Financial until he retired in 1987.

After retiring, Ray served as an ordinance worker and shift coordinator in the Salt Lake City Temple for nineteen years. Ray served as a sealer for nine years during that time. Maryetta served with him for much of the nineteen years. Ray was devoted to church service. In Boise, he taught Seminary and served as a Counselor in the Bishopric. In Idaho Falls, he was Bishop. In Downey California he was a Counselor, a Bishop, and in the Stake Presidency. In Salt Lake City, he was High Priest Group Leader, Counselor in the Bishopric, and Ward Clerk for three different Bishops. Ray and Maryetta filled a mission in Manchester, England from 1991-1992. Ray oversaw mission finances and facilities.

During his limited free time, Ray enjoyed playing tennis and cross-country skiing. He also grew tomatoes, cucumbers, zucchini and other produce as well as tending various fruit trees. He took great pleasure in sharing with friends and neighbors. With Maryetta and friends, Ray traveled the world. They visited Hong Kong twice, Australia, and various spots in Europe several times, as well as Alaska, Hawaii, and Canada. When Maryetta’s health failed, he became her primary caregiver. They enjoyed playing the card game “hand and foot” and rooting for local college football, basketball, and volleyball teams on TV.

To order memorial trees or send flowers to the family in memory of Ray Forman, please visit our flower store.