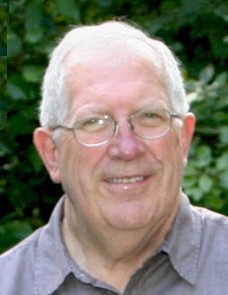 Our beloved husband, father, grandfather and great-grandfather, Max Gene Peterson passed away on Thursday, May 30th after an eight-year battle with Parkinson’s.   He fought this disease long and hard and truly lived his mantra of “When the going gets tough, the tough get going”.  We will always remember his strength that he demonstrated to the very end.

He was born June 10, 1938 in the small town of Grover, Wyoming to Edward and Daisy Peterson, big sister Verree and big brother Dale.  He was raised in Grover, milking cows and performing other farm chores.  This is where his love of animals flourished and remained with him throughout his life.  He graduated from Star Valley High School in 1956 and went on to attend and graduate from the University of Wyoming, graduating in Civil Engineering in 1961.   He was Wyoming through and through and followed diligently the Cowboys football and basketball teams.  He loved his Wyoming roots!

During the summers of his university days he worked for the US Forest Service surveying roads.  He was offered ten engineering jobs prior to graduation and after serious consideration accepted a full-time position with the Federal Aviation Agency in Los Angeles to engineer air traffic control centers in various airports throughout eleven western states.  This job required him to move every six months to a different state.  He did this job for 4 ½ years living in hotels and on a daily per diem of $12 a day.  He was so very proud that he lived so frugally and solely from his per diem and was able to set aside a large amount for his future.

In 1965 he was hired by the Lawrence Livermore Lab in Livermore, California as the Project Engineer for above and below ground nuclear testing and peaceful application of atomic energy. It was at the Livermore Lab that he fell in love with a new secretary, Carol Andersen, and six months later they were married in Sparks, Nevada on July 15, 1967.  They purchased a home and some property in Fremont, California and began to raise a family.  In August 1969, Max and Carol were baptized as members of the Church of Jesus Christ of Latter-Day Saints and one year later were sealed in the Oakland Temple. He remained a faithful and stalwart member serving in numerous callings and assignments.

While living in Fremont they had their four children, Kristi, Eric, Marla and Mark.  He enjoyed teaching his children about his heritage, hard work, and the importance of a good education.

In 1977 he was hired as the Chief Airport Design Engineer for the Salt Lake City Airport and he and Carol moved their family to Sandy.  In 1982 he became the Salt Lake City Engineer. During his time as the Salt Lake City Engineer, he was instrumental in the Flood of 1983, the North Temple Project, the restoration of the City County Building, the Smith’s Ball Park and numerous other city projects.  He implemented the Utah City Engineers Association and what began as a meeting with eleven city engineers annually in St. George has become an annual meeting with over 160 in attendance.  He was awarded the Top Ten Public Work Leaders in USA and Canada in 1989 and received the prestigious grade of fellow in the American Society of Civil Engineers. He retired in 2010 as the longest standing city engineer for Salt Lake City with a tenure of 29 years.

He and Carol served as Guest Service Missionaries on Temple Square from 2007-2012.  He loved serving in this capacity and meeting people from around the world.  He served as a member of the Board of Directors for the South Despain Ditch Company for over sixteen years.  He also assisted Carol in a foreign exchange program, NACEL, from 1984 to 1998, which each summer brought over 300 high school students from France, Spain and Germany to Utah for month long homestays.  He loved meeting these teens and chaperones, and over the years he and Carol hosted many in their home. He drove many to experience California, Utah National Parks or Jackson Hole.   Still to this day many remain in contact and upon learning of Max’s passing contacted family members to express their condolences. Max was very soft spoken and was not one to speak much about himself or his accomplishments. He loved his family dearly and was so proud of each of them.  He looked for the good in others, loved animals of all kinds, enjoyed playing brain puzzles, and loved the Yankees.

We are so blessed to have had Max in our lives and look forward to the day we will be reunited.  Max is survived by his wife, Carol, children, Kristi Horton (Gary), Eric, Marla Winegar (Weston), Mark (Jennifer), 14 grandchildren, 3 great-grandchildren, sister, Verree McNeel, brother, Dale Peterson (Barbara), and many nieces and nephews.  Preceded in death by his parents, father and mother in-law and brother-in-law, Paul McNeel.

Per Max’s request, a memorial service to honor him will be held Saturday, June 29, 2019 at the Granite Chapel, 9520 South 3100 East in Sandy at 11:00am.  The service will be followed by a luncheon and opportunity to visit with the family at their residence, all are welcome.   A burial will occur with immediate family prior.

The family kindly requests that in lieu of flowers you consider donating to your favorite charity in the name of Max Peterson.

We’d like to thank Hearts for Hospice, especially Evan, Veronica, Ron , Racheal, Dr Valenti and others for the loving care given Max.

To order memorial trees or send flowers to the family in memory of Max Peterson, please visit our flower store.