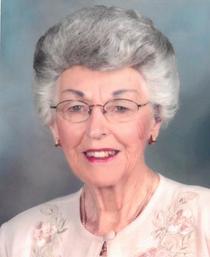 Maryetta Gardner Forman, age 90, Salt Lake City, UT, passed away April 24, 2017, due to complications from a fall and broken hip.

Maryetta was born on St. Patrick’s Day 1927, to Fenton and Ora Manwaring Gardner and raised in Delta, UT.  She graduated from Delta High School and attended Utah State where she met and married Ray Forman on September 3, 1947, in the Idaho Falls Temple. They lived in Boise, ID, where their two daughters, Gwen and Michale, were born. They then spent two years in Idaho Falls, ID. In 1960, Ray’s work took them to Downey, CA. They were pleased because daughter Michale could receive better education for the deaf.

Michale was also born with cerebral palsy. Maryetta was inventive in finding ways to teach Michale to eat, walk, and perform daily tasks that most of us take for granted.  She taught Michale so well that today Michale can live independently.

Maryetta was a gifted LDS Young Women’s Leader and had a great influence for good.  She was still in touch with many of “her girls” at the time of her passing.  She served in the Relief Society Presidency of the Salt Lake Mt. Olympus First Ward. She sang in the choir of every ward she lived in. She was a great support to her husband in his demanding insurance career and his many church callings.

She and her husband fulfilled a mission in Manchester, England from 1991-1992. Maryetta was the Mission Office Secretary. She and her husband served in the Salt Lake Temple as ordinance workers for nearly 17 years, and during part of that time she assisted one of the assistant matrons.

Maryetta was a talented seamstress sewing clothes for her daughters and also monogrammed towels as gifts.  She enjoyed embroidery and other kinds of needle work. Many of the family still have and treasure handmade quilts, towels, and wall hangings. She also enjoyed crafts, journaling, and photography. Maryetta faithfully journaled daily for decades. Maryetta was a gifted and gracious hostess and enjoyed entertaining friends and family. Her family has fond memories of the “Nonny rolls” she made for special occasions.  She and her husband traveled the world.  They visited Hong Kong twice, Australia, and various spots in Europe several times, as well as Alaska, Hawaii, and Canada.

To order memorial trees or send flowers to the family in memory of Maryetta Forman, please visit our flower store.