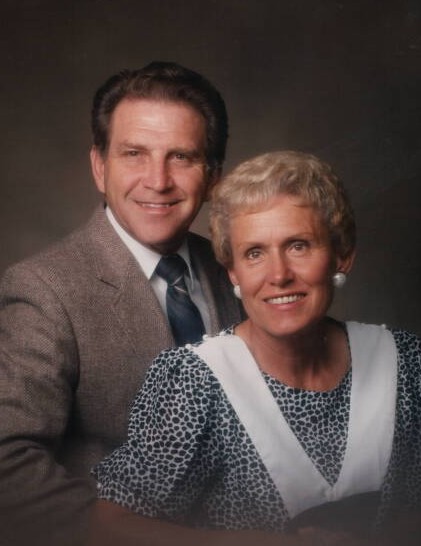 Mom was raised on a farm which molded her character from a young age. Amidst the Great Depression, Mom's early life was difficult. She learned to save and realize the value of seemingly everything. The coal-burning stove was used to heat water for not only cooking, but also for laundry and bathing. She considered a warm bath a rare luxury. Soap was made at home, clothes were washed on a wash board, and irons were heated by the fire. Saying, "No" to family chores was not permitted. This molded Mom into a strong, courageous, and tough woman.

Growing up it was expected that she and her siblings learn to play at least one instrument. Mom chose the piano and with diligent practice, she excelled. She developed a touch to the piano that made her music come to life. Using her ability to play by ear, she only needed the title of a song, or a few bars hummed before she was off, creating a beautiful arrangement to the melody. Notes weren’t just played; they were interpreted and given life. Her piano music often left people in awe, not wanting her to stop playing. If she heard someone refer to her music as simply a gift, she might correct them by saying, “This didn't happen on its own. It takes work, and I practice every day.” It was true, she did have a gift, but she also worked very hard to develop her skill. In high school, Mom learned the clarinet and saxophone and played in a dance band performing 1940's and Big Band music.

After graduating from Dixie College, Mom attended BYU where she studied music and graduated with a Bachelor of Arts in Elementary Education. She taught school for two years until the birth of her first child, Scott. She worked as a substitute teacher for both Salt Lake City and Granite school districts until she was well into her 80’s.

Mom married her sweetheart, Charles Robert [Bob] Lambert, in the Salt Lake Temple August 17, 1955.  They had nine children but lost their precious son, Jay Robert, just hours after he was born. Together, they raised eight children who were the joy of their lives.

With music being such a large part of who Mom was, her children grew up in a home exposed to magnificent talent. As an accompanist and director to many vocalists, instrumentalists and choirs, her children were often serenaded at night with great music.

Mom served in various church service capacities.  Her favorite service was alongside Dad as a missionary. They served in the Utah State Prison, Salt Lake Inner City Areas, and Joseph Smith Memorial Bldg. Missions. As a host of the Joseph Smith Bldg., Mom entertained visitors with her music on the grand piano. For years, it was a Lambert-Family treat for children and grandchildren to see their mother and grandmother play in such an elegant place.

Family history was something Mom felt she had a duty to provide.  She was proud of her heritage on both the Clark and Lamb sides.  She spent years researching her roots and authored The Osmer Lamb Family History. It provided much history about the Clark family and the Orderville area as well.

Mom wanted her children to learn how to work as hard as she did while living on the farm. Using work as an opportunity to teach and talk about life, she regularly worked alongside her children. Mom uprooted trees, lifted heavy rocks, demolished walls, painted the inside and outside of her house, trimmed trees, dug-out sprinklers and cleaned carpets. She never shied away from a job needing to be done, and she expected her children to do the same. One of her common teaching phases was, "Look around, see what needs to be done, and do it!"

Besides work, having fun was important, too. While raising her family, she would often want to get together and have some fun. Her children have fond memories of shooting the tube at the mouth of Parley's Canyon, sledding at Mt. Dell, and having fun at Lagoon. Mom's laughter brought joy to all around her.

As a Master Gardener, Mom’s home was referred to by neighbors as “the house with the flowers.” Each year she treated the neighborhood to beautiful landscapes. They were amazed at what she would create and loved to walk by her home and enjoy its beauty. Mom’s passion in gardening was to search for plants at garden centers that were struggling and on sale. She'd rescue them to her yard and tenderly care for them. Those were the plants that gave Mom her greatest fulfilment each year. Gardening wasn’t just about color and texture; it was about nurturing failing plants and getting them to flourish. Mom could hold soil in her hands and by its texture she could tell you what the soil needed.

Mom wasn’t like typical women, and she was proud of that. She was unapologetic in how she lived her life. She did laborious work and wasn't afraid to get dirty. While most women were wearing nail polish, Mom was wearing band-aids. The work she did marred her hands, bruised her nailbeds, and even caused terrible sores. If she needed to chase down a child through the neighborhood to ensure they finish their chores, she would. She was one of a kind… her kind – a hard-working woman who would do anything for her children and family.

There was a soft side to Mom that others didn't see. She was private, sensitive, and would cry. She had a listening ear, and was always willing to be a sounding board, a place to vent without judgement. Mom was a friend and comforter. She gave heart-felt hugs.

The grit and fortitude Mom learned as a child gave her needed strength to live the last three years of her life on her terms. On December 4, 2018, Dad passed away from cancer. His tremendous loss left a gaping hole in Mom's heart. She missed his company. Four months after Dad's passing, Mom was severely injured in a car accident. It changed her health and quality of life. She lived her remaining years in pain but never complained. She remained incredibly independent and always told her family, "Don't worry about me, I'm fine."  All were in awe with her ability to carry on. She shoveled snow, gardened, set paving stone and cared for her home. Friends and neighbors often referred to her as a "pioneer woman." She didn't stop doing any of the things that gave her joy.

Services for Lorena were streamed and can be accessed with the following link https://www.facebook.com/CannonMortuary The link will take you to Cannon Mortuary’s Facebook page.

To order memorial trees or send flowers to the family in memory of Lorena Lambert, please visit our flower store.