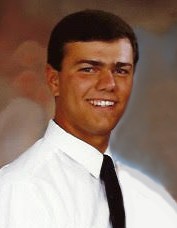 Ken was born on June 27, 1967 in Cheverly, Maryland to Richard Henery Thomas and Virginia Ellen Anderson.  He married Melanie Jeanne England on September 8, 1990 and was sealed in the Salt Lake Temple for time and all eternity.

Ken was athletically gifted and enjoyed playing all sports. He excelled in football during his youth and loved participating in the Thomas Brothers softball team for many years.  Ken took personal pride in everything he did.  He spent many years working with the Thomas brothers in the family stucco business and continued his career professionally as a general contractor. His later career with storming, lead his family on many great adventures living across the U.S., touching many lives in many places.

He possessed a great love of nature finding beauty in the outdoors, but his greatest joy was his love for his family.  He maintained a witty, sarcastic and keen sense of humor and loved a good joke.  He was affectionately known as “Ken the 10” or “Kenword” among family and close friends!  He was true to his word, maintaining such great integrity throughout his life, which was a principle he taught his children. Ken was truly an amazing husband and father, an incredibly hard worker and one of the kindest persons one could know.  He will be greatly missed.

A memorial in honor of Ken will be held on Saturday, July 15, 2017 at 2:00 pm in the Brighton Point Ward, located at 3500 East Bengal Blvd. with a visitation from 12:30 pm – 1:45 pm.  Family and friends are invited to join together for connecting, reflecting, and sharing loving memories immediately following the service.

To order memorial trees or send flowers to the family in memory of Kenneth Thomas, please visit our flower store.