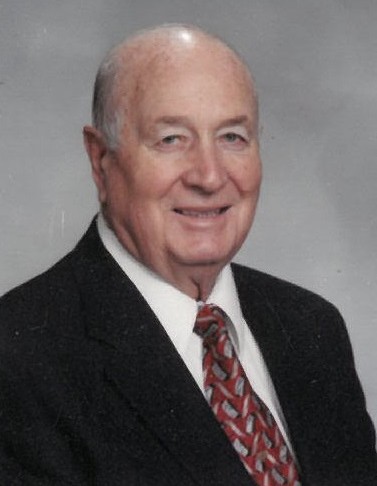 Joseph Nolan Hanson passed peacefully away July 28, 2021 at age 92 from causes incident to age.  Born March 6, 1929 in Leamington, Utah, the third of four children born to Harold Joseph Hanson and Florence Ruby (Williams) Hanson.  His parents and all three of his siblings (Dorr, Mark, and Alice Cowan) and their spouses (Elizabeth, Wilma, and Bill), and his first wife Juanita (Warlick) of Wilmington, North Carolina all preceded him in death.

A sometimes precocious but always loving child, much of his early life was shaped by the Great Depression, and then the Second World War.  He served as the first full-time missionary called from his Church of Jesus Christ of Latter-day Saints ward in what was then Dragerton, Utah.  He served in the Eastern States Mission, and throughout his life diligently fulfilled a number of diverse callings in the Church. Very shortly after his release he married Juanita in Wilmington, and the newlyweds then rushed cross-country by car to be sealed in the Manti, Utah Temple.  Nolan then served in the United States Army, where he acquired a range of automotive skills while assigned to the motor pool, which served him well in his professional life. After the Army, he enrolled at Brigham Young University, from which he graduated in 1956 with a Bachelor’s of Science degree. He then began teaching history and industrial arts at the high school in Price, Utah and later at Olympus Junior High.

Known for his ever-cheerful demeanor, keen sense of humor, and eagerness to help out others with his bewildering array of carpentry, construction, and mechanical skills, Nolan especially loved teaching wood shop and imbued a number of students with the joy of woodworking.  He eventually found his greatest career fulfillment working for the Utah Department of Natural Resources, Division of Parks and Recreation, where he served as Development Coordinator and played a pivotal role in the creation and improvement of a number of State parks.  He took great satisfaction from the role he played in moving the Brigham Young Forest Farm House from Liberty Park to its present location at the “This Is The Place” Monument.  But he considered his crowning achievement his participation in the development of the Provo-Jordan River Parkway.  His career with the State complimented his natural affinity for the outdoors as a dedicated camper, angler, and hunter.  He firmly believed in the adage that time spent fishing cannot be deducted from a man’s life.

After retirement, and the passing of Juanita in March 2000, he served as a Church-service missionary at the new Conference Center of the Church.  While there he met and soon became friends with recently widowed fellow missionary Joy (Marchant) Gatherum. Soon their relationship blossomed into love and they were married on 6 August 2003, increasing his family exponentially as Joy’s children and grandchildren embraced him as their own.  After their respective Conference Center Missions, Nolan and Joy served their own mission in the New Jersey, Cherry Hill Mission; after their mission service, they cruised and toured the world, seeing many amazing sites.

From his marriage to Juanita, Nolan is survived by his son Marion J. “Sam” (Rolayne), and daughter JoAnn Mitchell (Mike), along with six grandsons, and ten great-grandchildren.  He is also survived by Joy and her family: daughter Rachelle Peterson (Rick), Todd James (Sheri), Troy (Stacey), Thomas (Suzette), and John (Jenna), plus ten grandsons and five granddaughters and twenty-one great-grandchildren.

To order memorial trees or send flowers to the family in memory of Joseph Hanson, please visit our flower store.