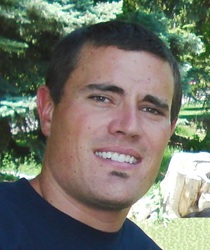 Jay Parker Garrett, our gentle, compassionate son, brother, and uncle, completed his mortal journey at the tender age of 38, on June 24, 2016, following a valiant but long and painful battle with depression.  Parker was born in Idaho Falls, Idaho, on December 12, 1977, to David Jay Garrett and Patricia Nelson Garrett.  As the third of five children, Parker was good at everything he did, from football and basketball to the saxophone.  Parker never wanted to stick out, though, and as he grew to his full height of 6’6” he often slumped so that people wouldn’t notice him.  He was handsome, talented , and strong as an ox, yet more thoughtful and considerate than anyone we’ve ever known.  Children and animals gravitated to Parker throughout his life; his innate goodness and guilelessness drew them naturally to him like bees to honey.  Parker radiated love to his nieces and nephews, who were comfortable with him even in his darkest moments when he wasn’t comfortable with himself.

Parker could figure out how to build anything and earned a living as a highly skilled welder, working at times in Alaska and Hawaii in the complicated medium of aluminum.  He was notorious for working 16-hour shifts and losing weight because he would forget to eat.  From the age of 16, Parker was fascinated by off-roading.  His first project was a 1976 Toyota Land Cruiser FJ40, which he modified over and over and drove in rock crawling competitions that worried his poor mother to no end.  Later on he built high-end custom desert racing trucks from the ground up.  Parker never loved formal schooling, but he had a knack for physics and engineering that he nurtured and put to work for the use and benefit of others.

Parker loved animals—especially dogs—as much as they loved him.  The pride of his life was Hana, a Bouvier des Flandres puppy given to Parker by his family a few months before his passing and whom he named for the Maui town where he was most at peace.  Parker gave his whole soul to Hana, taking her on walks on the mountain trails near his home almost every evening and camping with her in American Fork Canyon.  Hana provided an outlet for Parker’s outsized heart and helped him to reconnect with his family after a few especially difficult years cycling through depression, and periodic recovery.  Hana was with him when he passed, and we will now shower her with the love we so wish we could give to Parker.

Parker is survived by his heroic mother, Pat Garrett, as well as his four siblings: Tyler (Becky) Garrett; Brooke (Jed) Burton; Matt (Michelle) Garrett; and Amber (Bryan) Wood.  His ten nieces (soon to be twelve) and seven nephews will miss him desperately.  Parker was preceded in death by his father, David Garrett.

While we ache at the loss of our gentle giant, we take comfort in knowing that Parker’s daily struggle with the pain of depression and anxiety has ended, and that he is reunited with his dad and many other loved ones who have ached with him for so long from the other side.  Run home, Parker.

To order memorial trees or send flowers to the family in memory of Jay Garrett, please visit our flower store.