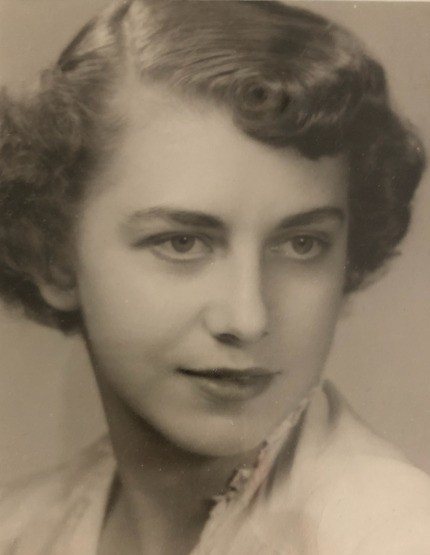 Our beloved mother, grandmother, and great-grandmother, Jacqueline Maurie Benson Bell, passed away peacefully at her home surrounded by her loving family on Tuesday, April 23, 2019, just shy of her 94th birthday.

Jacque was born May 17, 1925, to Serge and Linda Benson in Logan, Utah, and was the youngest of their eight children.  She was a vivacious child with big aspirations, and never felt restricted by her gender.  When her father declined to pay for flying lessons, effectively eliminating her desire to be a pilot, Jacque next set her sights on working in the FBI.  However, since women weren’t allowed in the bureau at the time, she eventually determined that the next best thing was to become a lawyer.  After completing her bachelor’s degree at Utah State University, she funded her way through law school at George Washington University.  While there, she met her “boy,” Jay Bell, of Ogden, Utah, who was also studying law.  It took several marriage proposals and an eventual ultimatum to crack Jacque’s strong will, but Jay snagged her and they were inseparable from then on.  They were married on August 25, 1950, in the Logan, Utah temple.  Soon after, they passed the Utah Bar together, and Jacque became the 31st female lawyer in the state.  Settling in Salt Lake, they established their own law practice, and worked side by side for 50 years.

Jacque loved nature and the beauty of God’s creation.  Together with Jay they built a second home in Springdale, at the mouth of Zion National Park.  That labor of love has continued to be enjoyed by their progeny as well as countless friends, the luckiest of whom get the privilege of seeing the sunrise on the West Temple through the master bedroom window.  In Salt Lake, Jacque treasured Mount Olympus, which she referred to as “her mountain,” to the east, and her stunning panoramic view of the Salt Lake Valley to the west.  Her other favorite place was California, particularly Carlsbad, where they owned a timeshare they occupied for several weeks each year.

No matter where Jacque and Jay were in residence, there was always music playing and/or being sung, hummed, or whistled.  Though her first love was Chopin, Jacque readily adopted Jay’s affection for Mozart, and always balanced that with some “fabulous fifties.”  Their combined love of music, art, travel, history and culture was generously passed on to their family through countless plays, concerts, operas, trips, and other enriching activities.  They encouraged their children and grandchildren to seek and obtain meaningful education and careers, and led by the shiniest of examples.

Jacque’s life was forever altered when Jay passed away nine years ago, and she had missed him every day since.  One coping mechanism she adopted was her self-proclaimed shopaholic’s disease.  While much of modern technology eluded her, Jacque became rather adept at online auctions, which made visits to her house a proverbial grab bag of goodies – sometimes of unknown origin.  Her spirit of finding joy in giving to others will live on in the hearts of those who knew and loved her.

Though her mortal body became gradually weaker after Jay left her, Jacque continued to travel with and entertain family.  Her keen intellect and sharp, albeit stubborn, wit remained and were adored by everyone with whom she came in contact.  Never one for small talk, she tended to attract strangers who needed a listening ear, and she always obliged.  She loved interacting with her great-grandchildren, and was extremely proud of her offspring, all of whom constituted her greatest joy.  The reunion in heaven with Jay undoubtedly included a moment of awe for all the beauty, strength, and goodness they brought to the earth.  She will be sorely missed.

The family wishes to express sincere thanks to Leslie Cortez for her kind and diligent care during the past year.  We are grateful also for the many hospice workers, Meals on Wheels employees, and friends who were so good to Mom.

To order memorial trees or send flowers to the family in memory of Jacqueline Bell, please visit our flower store.