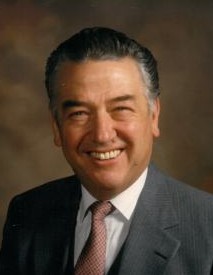 Jack was born on January 12, 1929 to Orange Eli and Belle George Bagley in Boring, Oregon.  Jack was the ninth of eleven children.  He was a kind man and was loved by many.

He grew up working on his family’s farm. He was a wrestler in high school and took second place in the state championships.  Jack graduated at age 16 from Sandy High School in Gresham, Oregon.  Soon after, he met Yolanda Vanek at a church dance.

Jack served an LDS mission in the Eastern States Mission from 1949-1951.  He cherished and shared the memories he had of his mission, including being able to participate in the Hill Cumorah Pageant.  Jack and Yolanda wrote to each other faithfully while he served his mission.

On May 1, 1951 he married Yolanda in the Salt Lake LDS temple.  They lived in Salt Lake City where he opened Jack’s Supermarket in 1952.  He later ventured into the restaurant business and was the owner of several different restaurants.  In 2015 he was inducted into the Utah Restaurant Association Hall of Fame.

He enjoyed being active in his community and in 1966 was elected to a term in the Utah State House of Representatives.  He was a member of the Jaycees and later started the Bonneville Exchange Club in which he was an active member for 45 years and served as club president.  He also served as president of the Exchange Club Rocky Mountain District.

Jack loved to sing.  This was a precious gift he willingly shared with his family and ward family. He was a member of his ward choir for many years and, as an accomplished soloist he was frequently asked to sing at different events, including family weddings.  He helped others enjoy music, especially in his family.  We will always remember the songs he sang for us, most notably O Holy Night which he sang nearly every Christmas. Jack enjoyed traveling extensively with family and friends. He and Yolanda visited numerous countries and developed strong, lifelong friendships along the way.

One of Jack’s greatest legacies is his testimony of the gospel of Jesus Christ. He served faithfully in many church callings and influenced the lives of many people as he did so.  He always shared his testimony with his family and he lived his life as an example of his Savior.

Jack is survived by his wife Yolanda of 67 years, and his children:  Ron, Robyn (Pete) Bave, Steve (Laurie), Rozan (Ron) Mitchell and Suzette (Peter) Bradford; 17 grandchildren and 27 great-grandchildren.  He is also survived by his brothers Robert D. Bagley, and Ronald N. Bagley, and nephew Donald Croall.  He is preceded in death by his parents, three brothers, five sisters and his daughter-in-law Susan Bagley.

Interment will be at Memorial Mountain View Cemetery.

To order memorial trees or send flowers to the family in memory of Jack Bagley, please visit our flower store.