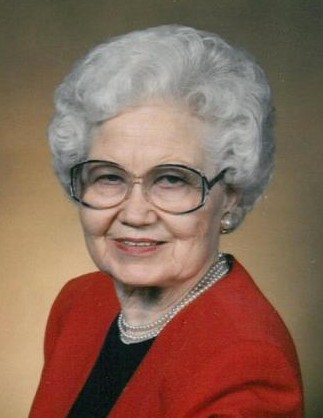 Gertrude Gene Rogers Tiede, 94 years old, passed away February 5, 2020 in South Jordan, Utah.  Born to Noble and Hazel Fallon Rogers August 29, 1925 in Gamerco, New Mexico.  Gertrude lived in and around Gallup, New Mexico for most of her life.  She married Leo Edward (Jack) Sullivan in 1945 and had two sons by him before they were divorced.  She would marry again to Jim Reynolds—later divorced, and finally to Joy F. Tiede in 1973.  In 1974 her and Joe were sealed in the Provo, Utah LDS temple.
Gertrude, in order to provide for herself and children worked at many endeavors including sales at Sweetbriar Dress Shop, and Shaw Drug.  But most notably at the Merchants Bank-- ending her career of 28 years as head cashier.  Gertie became actively involved in the Church of Jesus Christ of Latter day Saints and spent her life in serving in various capacities. Joe also, after he married Gertie, was just as committed to their faith.  Traveling and visiting family is something Gertie and Joe enjoyed a lot, traveling all over the United States.  Gertrude and Joe along with her mother, Hazel Rogers moved to the Silver City, New Mexico area in 1989.   It was here that Joe died in 2003.   Gertrude continued to live in New Mexico with various family until she moved to Utah to be closer to sons, Doug and Bruce and their families in 2014.  As she began to experience Alzheimer’s symptoms, the family adjusted to care for her until she was moved into a care center in July 2018.  She was in Beehive Homes of South Jordan when she passed away and the family wishes to thank the numerous caregivers that made her life better.
She is survived by: sons: Douglas and Ilean Sullivan, South Jordan, Utah, Bruce and Vivienne Sullivan, El Paso, Texas and Step-son, Jesse and Barbara Tiede, of Selma, Texas; 17 grandchildren; 59 great grandchildren; 2 g-great grandchildren;  and sister, Ginger and Andy Lucero of Gallup, New Mexico.  Preceded in death by: siblings, Helen Hamilton, Patsy Sullivan, Ruby Haney, L.H. Rogers and, step-son, Billy Tiede, 2 great granddaughters, and 1 step-grandson.
Funeral services will be held Saturday, February 15, 2020 at the Church of Jesus Christ of Latter-day Saints 9636 South 1700 East, Sandy, Utah at 11:00 am, with a viewing preceding services at 10:00 am.  A Graveside Memorial Service will be held Tuesday, February 18, 2020 at the Church of Jesus Christ of Latter Day Saints, in Ramah, New Mexico at 11:00 am, with internment to follow at the Ramah, New Mexico Cemetery.

To order memorial trees or send flowers to the family in memory of Gertrude Tiede, please visit our flower store.