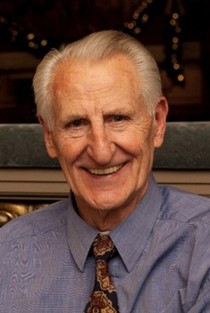 Our loving father and grandfather passed away peacefully on May 30, 2017 at Highland Glen Assisted Living in Highland, Utah. He was born July 23, 1928 to Frank Orten and Emma Gertrude Walton in Portland, Oregon where he lived until age ten. The family then moved to a farming community in Hansen, Idaho where he grew up farming until he served an LDS mission to the Northern States. He attended Brigham Young University when he returned from his mission and during that time was introduced to his sweetheart, Kathryn Black. They married on June 11, 1952 in the Salt Lake Temple. Together they raised their family in Salt Lake City, Utah and Placentia, California.

He completed his Bachelor of Science degree in 1962 at the University of Utah in Accounting. He earned a Master's degree in 1972 from the University of Utah in Education and in 1978 received a Doctorate of Education from BYU with advanced studies in Public School Administration. All of his schooling was completed while working full-time jobs to support his family. He always told his children that he went to school to set a benchmark for them to become educated.

He had the opportunity to teach some of his own children in seminary and institute which brought him great joy.

He had a deep devotion to the Savior, Jesus Christ, and was a seeker of truth to the very end of his life. A highlight of his life was a three-week trip with Kathryn to Israel and surrounding lands of the Bible where they walked where Jesus walked, saw the Garden Tomb and Sea of Galilee, which were their favorite sites.

Throughout his life he served in many church callings, his favorites being Gospel Doctrine teacher and Home Teacher. He and Kathryn served an inner-city mission in the 9th Ward in Salt Lake City.

He was a self-taught harmonica player and his family was often awakened on Saturday morning with his rousing songs. He loved to sing as well and would often do so on family rides. While they lived in California, he and his boys made great memories going to the beach together. His greatest hobby was reading and he always had a book in hand or at least within arm’s reach. Having always wanted a 40-acre farm in Idaho, he settled for being an avid gardener, who had plenty of tomatoes to share with his neighbors. He enjoyed taking care of his yard and mowed his own lawn through the age of 88. He also enjoyed cooking and canning and adding many home-grown vegetables to meals. As a sports enthusiast, he spent many hours watching his sons wrestle and his grandchildren play football, baseball, basketball, water polo, swim, gymnastics and dance.

Wes is preceded in death by his wife, parents, sister, Barbara Williams, and brother, James Orten. He is survived by his children, Juliann and David Rees, Suzann and Larry Hoyt, James and Cindy Orten, John and Jennifer Orten, 15 grandchildren, and 15 great-grandchildren.

We would like to thank the staff at Highland Glen Assisted Living, Angel's Crossing Hospice, and First Choice Hospice for the loving and devoted service they rendered.

To order memorial trees or send flowers to the family in memory of Frank Orten, please visit our flower store.