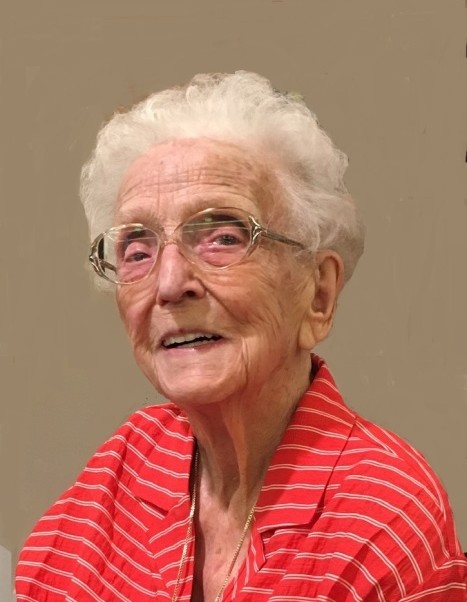 Emma Euleda Samuelson Randolph passed away August 19, 2019,  two months after turning 96. She was born on June 10, 1923 in Rose,  Idaho to John Victor Samuelson and Sarah Ellen Lambson Samuelson. She was the eighth of nine children and was the last to pass.

Mother was a courageous, strong, creative woman.  She had deep self discipline and gave herself fully to whatever was before her.  Among many, many other things, she taught us by example to have the courage to pursue our interests and dreams to the fullest.  Mother was a life long member of the Church of Jesus Christ of Latter Day Saints. She and her Walter were sealed for all time and eternity in 2006  in the Spokane Temple.

Mom graduated from Jordan High School in Sandy, Utah.  In 1945 she earned a BFA with majors in art and costume design at University of Utah.  She married Dad, Walter Henry Randolph, August 2, 1944. They moved to Spokane, Washington where they lived until 1957 when  they moved to Bermuda with the three of us, their daughters. For the next thirteen years, Mom pursued her love of sewing and costume design.   She designed and made costumes for several Bermuda ballet and theater organizations. Her reputation reached beyond Bermuda’s shores. In the mid l960, she designed and made several outfits for the British model Twiggy.  In 1978, she created the costumes for Arthur Rankin, Jr.’s TV movie Bermuda Depths, which stared Connie Sellecca and Burl Ives. She also designed and made costumes for the New York City based dance company, The First Chamber Dance Quartet.

Mom shifted her focus from fabrics to painting in 1970, becoming a member of and receiving awards from the  Bermuda Society of Arts. In 1978 she and Dad returned to Spokane where she soon joined the Spokane Watercolor Society. As a founding member and president of  River Ridge Association of Fine Arts Mother helped to promote the arts by teaching, painting, and organizing community arts programs. Over a thousand of her paintings, watercolors and oils,  hang on walls in Bermuda, the US and Europe.

Mother was preceded in death by our father, Walter Randolph,  and is survived by we three, Sharon Randolph, Sally Yorke, and Leslie Randolph and her seven grandchildren, fifteen great-grandchildren and three great-great-grandchildren.  She leaves us with a rich, visual history that commemorates her love of life and her passion for the arts.

Deep thanks to Christian and Keith of Comfort Worx Hospice and many CNAs at the Ridge at Cottonwood Memory Care for their care of Emma.  Memorial services will be held at Cannon Mortuary, 2460 E. Bengal Blvd, SLC, UT on August 24, 2019. Viewing-10:00 a.m. Service -11:00 a.m.

To order memorial trees or send flowers to the family in memory of Emma Randolph, please visit our flower store.