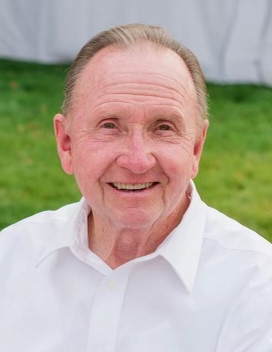 At age 84, Edward A. Barker, our beloved “Ted” passed away at home on June 07, 2022, after a long battle with Alzheimer's. Born to Dean Alexander Barker and Ava Kennedy Barker on July 9, 1937, Ted was raised in Salt Lake City, but spent his first 10 years of life in Escalante, Utah which he also considered home.
Ted loved life and put his all into everything he did. He ran track and graduated from West High School in 1955. He then went on to serve in the United States Air Force from 1955-1959. After his honorable service for our country, Ted went to Norway to serve as a missionary for The Church of Jesus Christ of Latter Day Saints from 1960-1963.
Shortly after returning home, Ted met the love of his life, and married Judith Ann “Judy” Niederhauser, in the Salt Lake City Temple on September 6, 1963. Together they had 4 beautiful children. Ted worked hard in various jobs to support his family.
His hobbies and passions included dogs, music, and church. Ted was a member of the Great Salt Lake Retriever Club and he bred Labrador Retrievers for 40 plus years. He was a member of the Saltaires Show Chorus. As a faithful member of The Church of Jesus Christ of Latter-Day Saints for his entire life, he enjoyed serving in multiple callings. One of his favorite callings was a missionary companion with Judy in the Salt Lake Inner City Mission. Ted thoroughly enjoyed his relationships with all people whom he truly felt were his extended family.
Ted’s greatest joy in life came from being with and surrounded by his family. We will miss him here, but rejoice in his long anticipated reunion with beloved family and friends. Ted was preceded in death by his parents Dean and Ava, parents-in-law Helaman & Gladys Niederhauser & Grant Housley, his brother, Robert Barker, sister and brother-in-law Jean (Jim) Armitage.
He is survived by his wife, Judith Ann Barker, his brother, Steve Barker, sisters and brothers in-law JoAnn Barker, Ileen Niederhauser, Mervin (Carolyn) Housley, Janet (Tom) Higham and Corwin Housley, his children, Carrie (Dyke) Briggs, David Dean (Tammy) Barker, Wendy (Chad) Utley, Edward Kennedy “TJ” (Diana) Barker.
21 grandchildren - Chelsea (Steve) Ward, Dalan (Angela) Briggs, Spencer Briggs, Erin (Weston) Nokes, Isaac Briggs; Whitney, Elijah, Wyatt, Emma, Jonah and Noah Barker; John (Morgan) Utley, Mary (William) Clark, Cooper Utley and Brooklyn Utley; Sydney (Andrew) Fuller, Elizabeth, Katherine, Olivia, Kennedy and Eddie Barker.
11 Great-grandchildren- Gabriel and Adrian Briggs; Maddelyn Ward; Jackson, James, Edward, and Samuel Utley; Lucy and Liam Clark; Ezra and Owen Fuller.
A viewing, for family and friends, will be held on Friday June 17th from 6 - 8 pm at the Cannon Mortuary 2460 E. Bengal Blvd, Cottonwood Heights, Utah. Saturday June 18th viewing from 9:30 - 10:45 am, funeral at 11:00 am, Brighton Stake East Ward Building on 2925 Bengal Blvd, Cottonwood Heights.
Lastly, thank you to all those who cared for, loved, and ministered to Ted in the last year of his mortal sojourn.

To order memorial trees or send flowers to the family in memory of Edward Barker, please visit our flower store.