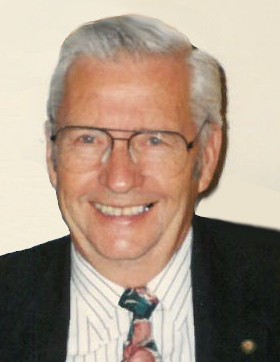 Don Leslie Scarlet passed away at home early in the morning on March 18, 2020 at the age of 92. He was born to Lawrence Eli and Clara Ann Richards Scarlet on July 23, 1927 in Salt Lake City. He graduated from South High School in 1944.  Soon after, he enlisted in the Merchant Marines where he served on three different ships in the Pacific. As the conflict in Korea started, he enlisted and served in the Military Police Company at Fort Douglas. Later the unit was activated to Fort Lewis, WA. He continued to serve in the Army Reserve and retired as a Chief Warrant Officer.  With a great love and service for his country, he was truly one of the greatest generation. After returning from his service, he met and was sealed to Bonnie Jean Theobald in the Salt Lake Temple in December 1953 and from that marriage raised four daughters.

Don followed his father and brothers as a pipe-fitter and plumber. His girls thought that a plumber was someone who could repair anything. No matter what he fixed they would tell him he was “such a good plumber”. Don started his own business, Radio Phone of Utah, where he began repairing two way radios and later added to it an engraving business. While running his business, he also worked as an electrical engineer for Johnson Controls. He retired after 36 years and continued his engraving business as a hobby. He was a computer genius and loved the newest gadgets & technology. He enjoyed ham radio as a hobby with his call sign N7DIZ and made many friends through the ARES group where he served as president. Don had a wonderful sense of humor and kept everyone around him in stitches. It was always a joy to be with him.

Bonnie passed away in December 1987 shortly after their 34th anniversary. In November 1993 he married Maria Stoof Bailey and expanded his family to include Maria’s children Karen & Roger (deceased) Hanson, Brenda & Doak Duncan, Mike & Lynette Bailey and the memory of Doug Bailey who had passed away. Maria took exceptional care of Don, and for 26 years they were always together.

Don was a devoted High Priest in the Church of Jesus Christ of Latter-day Saints and served in various Ward and Stake callings. In later years he would fulfill a church service mission on Temple Square working in Physical Facilities.

Don was preceded in death by his parents, his wife, Bonnie, and his brothers Florentine, Clifford, and Ralph. He is survived by his wife, Maria, his children, Leslie & Bruce Erickson, Lois & Clint Long, Leanne & Mike Doom, and Lizabeth & Scott Nelsen, his sister, Ruth and her husband K Achter, and brother-in-law Ron Canfield. Don and Maria have 33 grandchildren and 63 great-grandchildren together. Private family services will be held. There will be a celebration of his life with family and friends on his birthday in July.

To order memorial trees or send flowers to the family in memory of Don Scarlet, please visit our flower store.

A Celebration of Life will be held at a later date