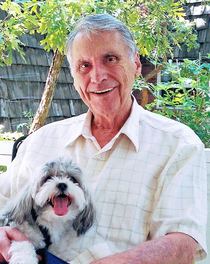 Clyde Samuel Gerome, born in Salt Lake City on December 29th, 1935, peacefully passed from this life on February 21, 2016 surrounded by family in the comfort of his home.  He was the son of Clyde Patrick Gerome and Edith Ardella Hill and is survived by his wife of 58 years, Constance Billee Bailey, whom he married in the Salt Lake LDS Temple on September 27, 1957.  He is also survived by his 5 children, Carman (Scott Latimer), Candace (Scot Poole), Clyde Gerome (Karla), Corinne (David Stewart) and Camille (Tim Knudsen), 21 grandchildren and 7 great grandchildren, and his sister, Marjorie McClure.

Clyde served in many church capacities throughout his life, but particularly loved his time as a service missionary at the church conference center where he served for more than ten years with his wife Billee.  He enjoyed his time there explaining the many interesting aspects of the Church of Jesus Christ of Latter day Saints.  In so doing, he developed many lasting friends and acquaintances.

Clyde had several loves in life.  Family, woodworking, friends and cars.  As the effects of Parkinson’s took its toll on Clyde, in turn the ability to enjoy some of those loves became a physical impossibility.  His love for his family and friends was expressed often as he became more and more fragile.  However, never giving into defeat, he told many in the family that he would be behind a steering wheel driving again.

Today, we honor Clyde Samuel Gerome, not for the jobs he had or the worldly acclaim that so many seek in mortality.  But we honor him for the most important accomplishments he made in life.  We honor him as a loyal husband of 58 years, an exemplary father of five children, a grandfather, a great grandfather and most importantly, a friend to all.  We marvel at the example he showed to us throughout his 80 years of life;  for his courage in the face of pain, his optimism for a better day.  We feel blessed for the moments we were able to be with him, and look forward with anxiousness to the time we will be with him again.

To order memorial trees or send flowers to the family in memory of Clyde Gerome, please visit our flower store.