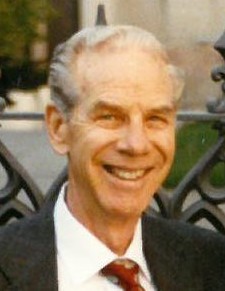 Clarence Willard Ellefsen (Clancy) beloved husband, father, brother, grandfather, great grandfather, friend and neighbor passed away February 21, 2018 at the age of 96 due to complications from a fall. He is survived by his loving wife Darlene Gustaveson Ellefsen his sister Gladys, his step sons Marvin and Larry, his grandchildren, great grandchildren, nieces and nephews, as well friends and neighbors of many years from his close-knit South Jordan community, caregivers, Sandi Howard and Bobbie Penman.

Clarence was born on September 11, 1921 in Salt Lake City Utah to Gudrun Froisland and James Ellefsen. He was the last of five children. His mother passed away one month after Clarence’s 6th birthday. He was sent to live at the Lund home for boys in Centerville (an LDS sponsored orphanage). He lived there for a few years until his Father James remarried Mary Hazel Jamison. Hazel, his stepmother and he were very close. He was a devoted son, caring for her in whatever way he could including taking her into his home until her passing.

On September 11, 1957 Clarence married Philis Wheadon in Clark, Nevada. They were married just one-month shy of 29 years, she had 2 sons from a previous marriage, Marvin and Larry Emery. Philis fought with cancer and lost that battle in 1986. Clarence loved and cared for her up until the last moment. After this loss it was a very difficult time in his life until meeting Darlene Gustavesen. They married on August 25th 1989 in the Salt Lake Temple. Darlene had three sons from a previous marriage Brent, Kurt, and Steve. In Darlene he found a wonderful woman who put a sparkle back in his eyes. They shared more than 28 years together and it was an inspiring thing to see how her love and companionship blessed his life. He was a devoted husband and partner and even a caregiver to her during the last few years. Clarence always had a positive attitude, an optimist until the very end. Whenever you asked him how he was, he would respond with a resounding, “absolutely fantastic.” He was a devoted member of the LDS church and served in various capacities there.

Clarence had degrees in mathematics and electrical engineering. He was a lifelong learner, always reading and studying a multitude of topics. He taught himself to play the piano while in his sixties. He was a licensed pilot and obtained his pilot license before acquiring his driver’s license. He loved to be in the air and performed aerial aerobatics and even did a little crop dusting in Arizona. He fondly recounted stories about flying and his experiences in the air. Even up until the very end of his life he talked about it and wanted to get back up there. He worked with Bell Labs and ATT as an accomplished engineer. Clarence was passionate about health related topics. If you were sick he could help you find just the right herb or supplement to cure what ailed you. While healthy eating was important to him he did have a sweet tooth and never really said no to a “just a bit” of dessert.  He loved to garden and being outside working in the yard. He was always very active and enjoyed hiking and exploring new places. He loved to travel, that was something he and Darlene enjoyed together. One of his favorite places was Florida. He loved the palm trees, sandy beaches and the sunshine! At Losing our beloved Clancy we say to him, adieu, and MAY YOU FLY… this time, on heaven’s wings, until we meet again.

A viewing will be held on Friday March 2nd 6-8 pm at the LDS meetinghouse at 1244 West Chavez Drive in South Jordan Utah. Funeral services will be Saturday March 3rd at 11 am with a viewing from 10-10:45 a.m. prior to the service at the same location.

To order memorial trees or send flowers to the family in memory of Clarence Ellefsen, please visit our flower store.